We're all going to die 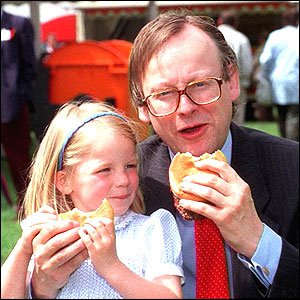 Gutbusters of the world unite

Fashions change. I don't know how, or why but they do. And in much the same ways as black is the new white, summer is the new winter and Dave is the new David, Avian Bird Flu (H5N1 strain) is the new BSE (Creuzfelt Jakob Disease). I don't mean to scare anyone but WE'RE ALL GOING TO DIE. Bring your poultry in-doors. You have no poultry? Well, go and do something good it's your last chance before you turn into a 20ft chicken (Alan Partridge) and die.
This particular potent strain, known as Tabloidus Panicus, is currently sweeping France (plenty of chickens there, you see) and after laying waste to France it'll come over to Blighty. And then it's all over. This strain has been carried across borders by nasty, smelly immigrants and WE'RE ALL GOING TO DIE. The strain has not altered to affect humans currently with only Daily Mail readers at risk. Boom, boom - I thank you!
So who's the world's saviour? Who is the world's saviour much in the way Bill Pullman acted in Independence Day? It is Markos Kyprianou, the EU Health and Consumer Protection Commissioner - no, not the baddy out of For Your Eyes Only and not that guy who lost in the final to Federer. He says "There's no reason for European citizens not to consume poultry meat and products. Products from infected animals do not enter the food chain. The message is that it's safe to consume poultry meat and eggs in the European Union". Well it's all Greek to me, but does Markos Kyprianou translate as John Gummer? I do enjoy this message. Don't worry, we shouldn't cull poultry, but go out and eat them all instead. Pay heed of this message supermarkets, Lord Sainsbury, Viscount Tesco, Earl Netto and Duke Tesco put your chickens on special offer. And hurry up, cos WE'RE ALL GOING TO DIE.

Comments:
Sheep shit gave over a hundred people in North Wales rampant diarrhea over Christmas, who's to say bird flu won't get in the system, eh?

Aren't Coca-Cola launching a new drink soon? This sort of thing is perfect for them.