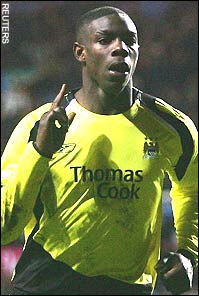 I was in the pub with my beloved yesterday and all was good. Yours truly slyly trying to watch Villa vs. Man City on Sky. After a bit, the girlfriend goes allowing me to watch the footie and then come back to hers (what an amazing woman!). Soon after Villa score a pretty decent goal courtesy of ugly, greasy haired, cheating b*stard, Milan Baros.
It looks like City are going out until a 94th minute equalizer from youngster Micah Richards (17). Queue ecstatic celebations, final whistle and then the inevitable, and inimitable, Garth Crooks' post-match interview. Garth's off with one of his standard, crap starter-for-ten questions, something like: "Micah, you scored. Last minute. How do you feel?" In answer to which Richards leapt up even further in my estimations (he had been class all game) by saying "Oh f*ck it."
Sadly, St Gary Lineker of the Big-Ear loved by the Housewife parish instantly apologises. For what? A bit of emotion? I have very fond memories of Henrik Larsson being interviewed on BBC after a match and when asked what he thought of the match, he answered: "It was pretty sh*t". Excellent. I would feel the Licence Fee would be more justified with more swearing in football coverage, especially in Garth Crooks interviews.
It sounds quite random, but as a boy, like practically every other, I wanted to be a footballer. I wanted to score on my debut and get mobbed by my fans. Nowhere in that fantasy is Garth involved.

Comments:
And with the conclusion of the fifth round of the cup, Barry, you have missed the opportunity to comment Brentford's phenomenal cup run for the second year running.

Barry, Barry, Barry... you're becoming such a disappointment to your readers. We had high hopes, but you chose to turn the other cheek to great little teams like the super Bees.

You wait. Promotion is in our grasp and you will be proved wrong as our paths cross and Wednesday are humiliatingly sent back down to League 1.