10 years on. Let's have a big birthday CAKE 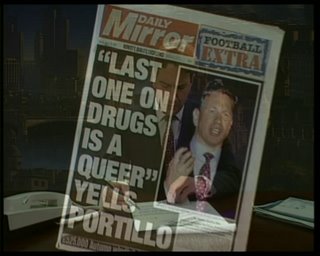 The funniest spoof of all time? Quite possibly. Whether it was paedos, crime, sex or animals Brass Eye tackled each issue with tongue firmly planted in cheek and delighted in enraging Middle England to complain in droves. However, it was on the subject of drugs to which this post refers.
CAKE. Scoring yellow bentines, clarkey-cats and getting jessop, jessop, jessop. Cake was the made-up drug that celebrities such as Bruno Brookes; Bernard Manning (it's a f*cking disgrace); Noel Edmonds; Rolf Harris (Jos Ackland's spunky back-pack) and David Amess MP were tricked into doing public warnings against. It really is a gift of the British to make established people look like total dorks and idiots. Well it did cause czech-neck and effected the part of the brain known as Shatner's bassoon.
The 10 years on to which I refer at the start of this article is David Amess' tabling of a Written Question on Cake. The actual anniversary is on Sunday, but as I am loathe to blog at weekends and may forget tomorrow here's the question in all its glory.

Mr. Amess: To ask the Secretary of State for the Home Department what action the Government propose in respect of the import of (a) khat, (b) gammahydroxybutyrate and (c) "cake" to the United Kingdom. [38968]

Mr. Sackville: Neither the khat plant nor the substances gammahydroxybutyrate--GHB--or "cake", which we understand refers to 3,4-methylenedioxy-N-benzylamphetamine, are controlled under the international United Nations drug conventions or under the Misuse of Drugs Act 1971.

The Advisory Council on the Misuse of Drugs considered the misuse of khat in 1988 and advised that there was no evidence of a social problem arising from its misuse in the United Kingdom such as to justify bringing the plant under the controls of the Misuse of Drugs Act 1971. We have no current plan to bring khat under legislative controls but will continue to monitor the position.

The misuse of GHB is to be review by the advisory council at its next meeting in November.

We are not aware of any reports of misuse in the United Kingdom of the substance known as "cake" but the advisory council nevertheless has under review the question whether this and a number of similar substances should be brought within the scope of the 1971 Act.

I'd love to score a political point by slating the Tories for being out of touch, but anyone Labour supporter who saw ex-Labour MP, Sid Rapson make a tit out of himself talking about paedophilia in the 2001 special will know that there exist some politicians, of whatever hue, who will do anything to get on TV...


Here is my ρage ... musicjunkeys.com