All Prezza and Incorrect 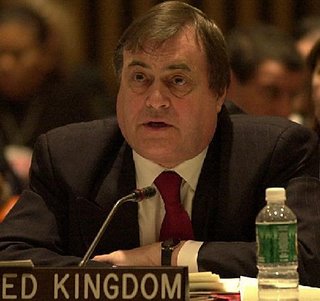 Even by changing his name to Ed Kingdom, Prescott was obviously still in deep water

There he was Prescott, the man; nay the common man - the protector of Labour values and seen as the man to contain Blair's blairite excesses. The man who would mercilessly rib the Tories and would be reeled out as last speaker at Labour Conference to rally the troops, or even comrades.
Now he's about as much use as Theo Walcott in your final 23; in essence a liability. Back in 2001 Prezza was still doing ok, memorably punching a guy who had pelted him with an egg. Well now the yoke's on him. He is rumoured to have had as many affairs as hot dinners. Diary secretary, a Minister and, for all we know, the candlestick-maker have all been wooed (allegedly) by happily married Prescott.
And now he finds himself in bed with a particularly abhorrent cove; Philip Anschutz. No chance of any Brokeback Mountain shenanighans in deepest Marlboro country mind, Anschutz is that old-fashioned defender of American values - a virulently homophobic, multi-millionaire, Republican backer. It is shameful.
The possibility of corruption is very much there. Anschutz owns the Millenium Dome which is in the running to become Britain's Super Casino. At the time of their meeting Prezza had ultimate control over planning. Corruption aside, it is lovely to see Labour Ministers associating themselves with such genuinely, lovely people - Anschutz is behind a ballot to overturn gay rights in his native state of Colorado. Well, if it's Rocky Mountains in Colorado, it's rocky times for Prezza.
Just to get it straight in my mind: Blair hangs with Berlusconi; Prezza chills with Anschutz and Opus Dei Kelly refuses to say whether she believes homosexuality is a sin.