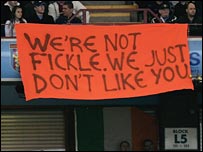 David O'Leary, the man of 1000 excuses of which the commonest is that he is infallible and only loses because he has to play kids in his team with the measly Chairman not coughing up sufficent de niro.
O'Leary was coincidentally the manager who spent more than Africa's continental debt whilst at Leeds, but nonetheless put Leeds' failure down to everyone else bar himself. (Note to self and readers alike: Leeds are now skint.) To be fair O'Leary almost achieved the unthinkable at Villa by so very nearly becoming as unpopular a figure as 'Deadly' Doug Ellis.
In a way it is a shame for football and whilst not being old enough to remember the 1982 European Cup winning team of Peter Withe, Des Bremner, Gordon Cowans, Dennis Mortimer and a very young Nigel Spink replacing the injured Jimmy Rimmer I remember some very good Villa teams and players (and of course Dr Jozef Venglos - some dentist - really - who inexplicably got the big job): Platt and McInally; Paul McGrath; Tony Daley's hair; little Alan Wright and Gareth Southgate. Now Villa are a shadow with players like Steven Davies; Gary Cahill and Gareth Barry notable exceptions.
For all his blathering about not having money O'Leary has signed such players as Eric Djemba-Djemba (so bad they named him twice); Wilfried Bouma (nowhere near as good as he is on Championship Manager); Milan Baros (an over-rated player who, whilst a natural goalscorer, could best have displayed his loyalty by tattooing 'COME AND GET ME PLEASE' on his forehead below his gr4easy curtains); Martin Laursen (so injury-prone that he could well be an English test cricketer) and Patrick Berger (who makes Laursen's injury problems look minor).
Bye, bye David. But don't worry; for I am sure it wasn't your fault.