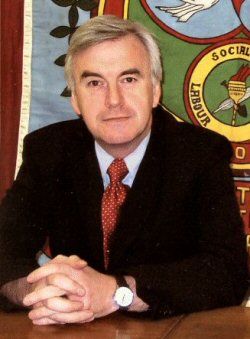 To quote Harry Hill: "FIGHT!" There will be no coronation, no handing over of the flame from Tony to Gordon (as if there ever would be). Campaign Croup Chair, John McDonnell MP, Member for Hayes and Harlington has thrown his hat into the ring. I have always been sympathetic to the Group's aims (as a whole) and am happy to see them put forward a candidate, although I am pretty sure he won't be getting Cllr Cross' vote.
This should now ensure that there is a leadership election with more candidates likely to make their intentions clear sooner rather than later. I must say that after his Trident proposals I am happy someone is standing against Gordon Brown. It is healthy for a party, which is, at times, floundering and buckling under the weight of its own scandal (and who would have thunk that back in '97?).
I assume now that rumours that were previously abounding that the Campaign Group candidate would be Lynne Jones were without foundation?

Comments:
Does this mean there will be a contest for sure? I doubt that. Is he even recognised in his own constituency or the majority of Labour party membership, let alone the wider country. I seem to recall similar comments from Ken Livingstone in 1994 and a proper campaign (even of the Mark Oaten kind!) from him never actually surfaced. It may be a contested election but this announcement is certainly not a guarantee that it will be.

ur 100% right Prince but i think it opens the door for other to throw their hats into the ring. at a later date, the door may be shut in mcdonnell's face. i hope not, but who knows? he's still got to get sufficient PLP nominations

Hallo I absolutely adore your site. You have beautiful graphics I have ever seen.
»