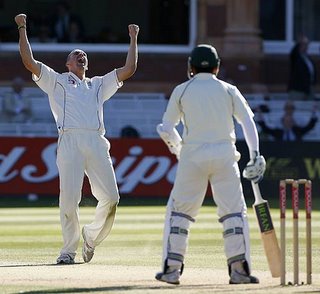 Was happy to see that England's star batsman and future World number 1 Kevin Pietersen took his first test wicket to go with his, as yet, solitary one day international wicket. KP had Kamran Akmal, the dangerous Pakistani wicket-keeper, caught by Geraint Jones. I always enjoy part-time, bit-part bowlers getting test wickets. I remember Michael Atherton trapping Wasim lbw in 1996, I think. He was bowling in tandem with Graham Thorpe with the match petering out to a drawer. If memory serves, it was a dubious call against Wasim too.
Speaking of Jones, as I very briefly did, he failed again with the bat. 18 and 16 in this test. And yes there were the obligatory couple of good shots. I had a cursory look at the statistics and, boy oh boy, they don't read favourably for Jones. A test match batting average of 26.67 is not good, but amazingly since he scored 52 in the first innings of the Second Test vs India (10/11th March - 7* overnight) he has scored 83 runs at a less than Gilchrist-esque average of 10.38

I wouldn't be too sure.
Being an Essex fan I can confirm that Goochie did a bit more than just turn his arm over being able to generate a bit of sideways move. Or to be very English: military medium, seam up.
I think big, fat Gatt used to bowl a little bit of medium as well? Screw that have just checked. Gatt got 4 test match wickets and Messrs Lamb and Gower have each claimed one test scalp (wicket rather than Native American scalping)