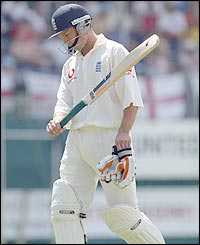 England are approaching 500 and looking very steady. Collingwood has played his best England innings and, although out early today, Cook also made a century. Ian Bell is trying to get into the groove and looking good and Geraint Jones gets 18. On this pudding of a pitch. The selectors must have the patience of Jude when it comes to Jones. And his magnificent 18 (which will bring his average down from its current heady height of under 27) included the obligatory great shot and also a six when the fielder dropped it over the rope. Thin ice doesn't sum it up. On a precipice, figuratively speaking, would be closer to the mark. Chris Reid, the heir apparent, must be right hacked off.

Was in the middle of blogging this when I got an email from fellow blogger - the Meat - www.themeatfromfleet.blogspot.com saying the same thing.

What do Papua New Guinians or whatever you call them know about cricket anyway?

Super color scheme, I like it! Keep up the good work. Thanks for sharing this wonderful site with us.
»