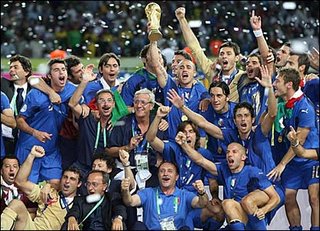 It's over. Like most football fans, I find penalties an unfair and cruel way to decide any match, let alone a World Cup final. Only when your team's playing, mind! The excitement and tension is amazing.
I feel sorry for France. They deserved to win - just - over the 120 minutes and injuries and a rush of blood to the head robbed the French of three penalty takers in Messieurs Vieira; Henry and Zidane. But the Italians took five incredible penalties. Matterazzi taking the second? Centre backs who are notoriously the fall guys when it comes to shoot outs...Buried it beautifully. As did Pirlo before him and De Rossi; Del Piero and Grosso after him. And it was deserving that Cannavaro, earning his 100th cap for the Azzuri, lifted the World Cup, the greatest trophy in world sport.

Comments:
Interesting website with a lot of resources and detailed explanations.
»