Jeez that's a contrived pun, but desperate times call for desperate measures. Last night's semi-final between Germany vs. Italy offered more David Pleat colour commentary. Pleat is, of course, like an embarassing Dad on commentary. Unfunny jokes, nonsensical observational insights into the game and, as any football fan worth their salt will recall, that dance at Maine Road 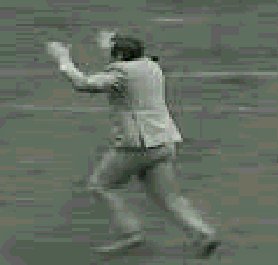 However, Pleat is no novice to crap commentary. As the Police woulkd say: "he has previous" - in fact a history littered with tosh. This is the man, for instance, who gave us:

"Winning isn't the end of the world"

"I've seen some players with very big feet, and some with very small feet"


When watching Holland during Euro 1996, "The future is bright, the future's orange"

These were eclipsed, however, by yesterday's offering that "the two German strikers just love to play with each other"
Cue Finbarr Saunders snorting and spluttering.

Ask Kerron about it, he loves talking about it.