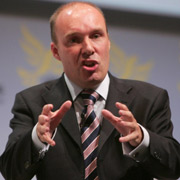 Quel tragedie? Mark Oaten, the disgraced soon-to-be ex-MP for Winchester will be standing down from office at the next General Election. By any standards, Oaten's meteoric fall from grace has been spectacular. From the Great Liberal Hope to the political scrapheap in less time than a fake tan would last.
His wife, Belinda; the devoted wife, stands by his side - smiling and baring her tormented soul to any hack offering a cheque - and, inexplicably, a career as a very minor celebrity beckons. Others have drawn the inevitable comparison between the Hamiltons and the Oatens.
I don't follow the Liberal Democrat party, but it appears that Oaten was well thought of and his leadership battle may well have ended in glory (as glorious as winning a leadership election for a largely peripheral politcal party can be) rather than the ignominy caused by the revelation of his...escapades with rentboys.
So the case of the man who had everything and lost it, including his dignity and his hair.

Comments:
I guess we'll be seeing her on Celebrity Love Island sometime soon then. And of course Channel 4 will host something more suitable for Oaten ?