Today is the first day of the rest of our lives 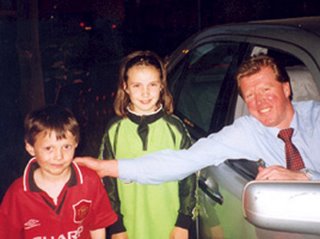 Steve Mac is in the hot seat as of today. He turned up late, but thankfully wasn't wearing his magic blue shorts and white socks combo that he woo-ed the world with during the World Cup.
The first major decision is who to appoint captain and then his squad for the Greece friendly. I think you can safely say that Walcott wont make it. Likely additions will be Defoe and Bent. Will he stick with Hargreaves? Will he keep Beckham in the team?
I so hope I am wrong about Steve McLaren. I just think he's a bit inept. Come on, I know he got Middlesboro to the UEFA final, but he only had one tactic - when you're losing chuck on four strikers and hope. It worked time after time, but importantly not in the final where they were trolleyed 4-0 by Seville. As McLaren's choice to put four up-front appeared not to be going to plan, McLaren stood with head in hands having used up all his subs and didn't appear to have a scooby.
He also wore shorts and white socks during the World Cup, in case you didn't notice.

Comments:
Hi there! I could have sworn I've visited this website before but after going through a few of the articles I realized it's new to me.
Regardless, I'm certainly delighted I came across it and I'll be bookmarking
it and checking back regularly!
Here is my site :: online businesses

Thanks for the auspicious writeup. It actually was once a entertainment account it.
Glance advanced to more added agreeable from you! By the way, how could we keep up
a correspondence?
Also visit my web-site ; shopping gadgets

I'm really enjoying the design and layout of your site. It's a very easy on the eyes which makes it much more
pleasant for me to come here and visit more often.
Did you hire out a designer to create your theme?
Superb work!

Have a look at my weblog - business checks