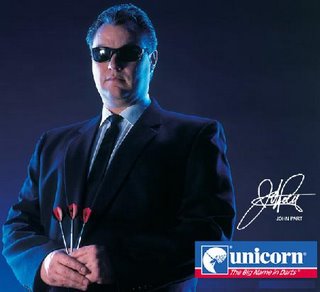 It was strange that I was thnking about darts. For those of you who do not know, I am a very big darts fan. Maybe I was thinking it as I was recently annihilated in the Sports. Whatever the reason, it struck a chord when a comment on a rival blog (no link as I was referred to as gutter blogging) praised me for blogging about darts. Perhaps blogged about darts sometime in the dim and distant past, as I haven't for quite a while. And considering I watched both semi-finals and the final of the excellent Premier League Darts and also, quite recently, helped my own team to a record finish of 4th in the league was a touch remiss of me, bordering on shameful.
So it was with great joy that I return to one of my favourite topics. John Part has rediscovered his touch and won the Las Vegas Desert Classic beating Raymond van Barneveld 6-3 in the final. Part is one of the good guys.
After leaving the BDO for the, in my opinion, far superior PDC he also won that version of the World title defeating his nemesis, and the greatest player to ever pick up a set of darts, Phil Taylor (in fact Taylor is every dart players' nemesis) 7-6 in an epic and unforgettable final in 2003.
In the last two years or so, however, he has lost his form and has been fighting for scraps and spoils off the great man's table. Yet this was his time and with Taylor vanquished by Barney in the semi the stage was set for the return of the man some call Darth Maple (he's Canadian you see...).
I'm happy for Part who always comes across as a gent and how on earth he tolerates the inane ramblings of that village idiot Tony Green during the BDO Worlds is testament to the man's mental strength. For those of you who are not dartists, Tony Green (the guy who used to do Bullseye) is like the bastard child of John Motson and Clive Tyldesly with added stupid pills.