Forget about the cut and thrust of politics. Forget about Blair and Cameron scoring points at the despatch box and forget about what's his name the Liberal bloke? Dunno have forgotten. Because these contests pale in comparison to the annual Liberal Democrat-Conservatives-Labour rounders match.
I played last year as the wholly enthusiastic Liberals slayed all before them. Well it appears that yesterday history repeated itself. Firstly, the Liberal Democrats smashed the Tories and then Labour were similarly vanquished by the Yellow Peril. So to the wooden spoon clincher and unlike last year when Labour was victorious this year the Tories thrashed Labour.
If only major world crises could be solved similarly.

UN: Saddam, let the inspectors in?
Saddam: No pig dog
UN: We have a resolution.
Saddam: I spit on your resolution
UN: What about a game of rounders and the winner does as they want?
Saddam: Batter up, infidel.
[Saddam shuffles off muttering "Come Comical Ali we must prepare"]

Sadly for the Liberal Democrats it takes more than a game of rounders to get to the negotiating table.

But, of course, this only tells half the tale. Whilst Dave tries to alter the image of the Conservative Party - some Tories persist in going with the Bertie Wooster meets Tim Nice but Dim image replete with stripey blazer and straw boater. And if you think victory or defeat will influence their mood you'd be wrong because after the rigours of rounders are finished for the year the Tories retire to stuff their faces and get sloshed courtesy of the Picnic Committee and the Wine Subcommittee (because, of course, picnics demand a committee whereas wine only warrant a subcommittee).
A brave and noble source El Diamante smuggled this email through to me. Timeless. As ever, click to enlarge. 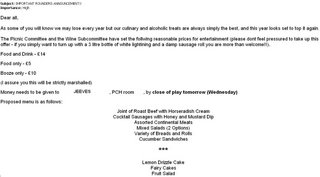