Dean Jones does a Big Ron 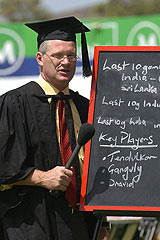 Dean Jones, the former Australian test cricketer has been sacked as a TV commentator for a comment of Big Ron proportions.
Atkinson was famously sacked as both an ITV pundit and Guardian columnist for calling Marcel Desailly "a lazy fucking nigger" - his excuse being that he did not think he was on air. Well Dean Jones' comment was perhaps even a touch more insensitive when he labelled the South African Hashim Amla 'a terrorist' after he held a catch at slip. "The terrorist has got another wicket" remarked Jones.
Switchboards were flooded with calls of complaint and Jones' employers Ten Sports reacted swiftly, sacking Jones immediately.

Comments:
racism... from the mouth of an Aussie.

jones' apology was a lot more plausible than Big Ron's. yet when ur defence hangs on the bit when he said "i didn't realise it was live on air" the cards are kind of stacked against u