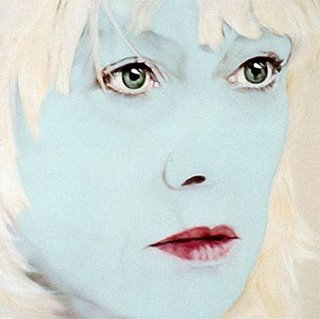 A disclaimer before I write this blog: This picture is really disturbing. It is Pauline Fowler. It is an oil painting and is one of several portraits which can be found on this weird, weird site (well the product is weird, the site is perfectally normal and functional).

I have had a fun evening. I caught the second half of Eastenders and whilst the Denise/Owen stroyline continues to be really good stuff, it is Pauline Fowler who steals the show in her own inimitable fashion.
Off she goes to Scarlett (doing a quick search on Wikipedia I found out that the club has previously been called: Cobra Club; The Market Cellar; e20 and Angie's Den) to deliver a birthday cake for Martin's birthday when she catches Martin's ex, Carly and Jake Moon in flagrante! Pauline is indignant as is her way to which Jake calmly says "Behave yourself, Pauline" He's a cocker-nee, you see. But Pauline goes on and compares them to randy dogs on heat that approach Betty (her dog) in the park which Pauline has to hit away with a stick. Pauline's grumpiness and horribleness (?) will be missed when she leaves but, that being said, let's hope she gets a good send off and a particular vicious gangland style murder storyline would surely be the way Pauline Fowler would want to leave the Square.