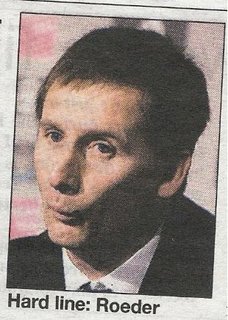 Now I am not a big fan of Small Mouth Glenn Roeder, but credit where it is due. He looks set to flog hapless, blunderer Jean-Alain Boumsong to Juventus for £2.5 million. It is a miracle to get any cash for this shocker of a defender.
Additionally, Damien Duff still represents excellent value for money at a mere £5 million and now he seems to be on the verge of signing a striker who is pretty good.
The man in question is Obafemi Martins who is set to fly in from Inter Milan. There was a problem when it emerged that Martins was not 21 (as claimed) but rather 27. This came to light when he claimed to have played in the same youth team as Celestine Babayaro who is...27.
Initially, Glenn insisted the fee would have to be changed to reflect his sudden ageing. Well it seems his age has been proved or Glenn has just decided to splash the cash anyway.
Oh well, the fee of £10.9 million is, of course, far too much but reality and value for money hardly seems to be major considerations when signing strikers. Any the how after the most unrealistic attempt to get Dirk Kuyt and being linked with the virtually unknown Italian forward, Francesco Taverno; Glenn has found a striker of some pedigree.
And Martins spouted the de facto footballer rubbish:
"Playing in the Premiership has been a long-term ambition and I am extremely delighted with the prospect of concluding that in the next couple of days"
The same line Anelka has used numerous times and is about as ingenuous as disingenuous can get.

Comments:
Is the mighty Barry making pro-Newcastle noises at last?! Agree about Boumsong - he was a joke and the sooner gone the better!

Not anti-Geordie at all. Just that Roeder's rubbish and Souness was worse.