Being a Labour Party member I am occassionally blessed with emails from Tony Blair, Gordon Brown, John Prescott or other Secretary of States. Obviously, they are not from them but rather a circular email to Members from an account set-up in the great and good's name. But I tells ya, the euphoria that sweeps through you when you open your emails to see a message from Tony Blair waiting for your attention...you can imagine, I'm sure.
So today I had an email from Gordon Brown entitled OFFICIAL - GORDON BROWN THE MONSTER. Cue sinister music. I knew it.
On reading the email I discovered that it was not Gordon Brown MP, the Chancellor of the Exchequer but rather Gordon Brown from Eden Springs, the supplier of water coolers. And Monster being the internet job agency rather than an ogre. 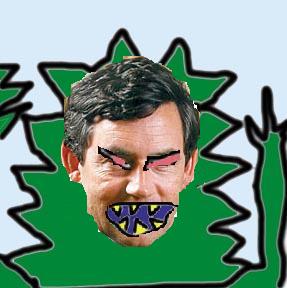