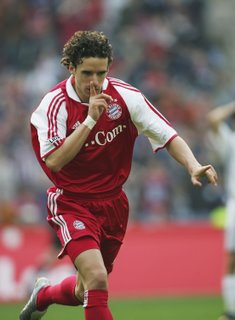 Let's cut to the chase: before the World Cup Owen Hargreaves was widely, and wildly, lamented as the worst thing since unsliced bread.
Here was a man who nobody knew, who had somehow got into the England squad. The fraud. Now, however, he is the sweetheart of the nation having actually played well in the World Cup. Indeed praise is coming from all quarters and he is destined to sign for Manchester United.
Practically all of the BBC World Cup pundit team, most notably Ian Wright, slagged Hargreaves off so much. Not understanding why Sven would ever pick him in the squad, or pick him over Michael Carrick; Hargreaves was ridiculed by experts as renowned as Frank Skinner whose number 1 thing he was looking out for in the World Cup was:
1) A reason for Owen Hargreaves being in the squad
Maybe cos he's good, you prick. His number 5 point was:
5) A pundit saying that Peter Crouch is "surprisingly good with his feet for a tall man" Yeh, that'd be funny if the Guardian Football Unlimited site had not been making the gag for about 3 years now.
So, in a round-about way, what I am asking is when will these experts stand up and apologise. Or preferably when will their employers sack these idiots who constantly give woefully inaccurate, and on occasion offensive, observations about people they are supposed to know about?
If you're interested, this was my blog post on Hargreaves when he was called up to the squad. And if you're interested, yes I should be a football pundit for the BBC.