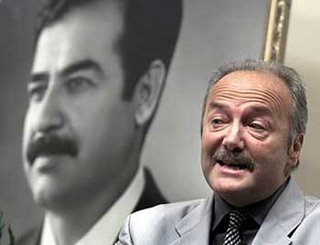 The official spokesman for Hizbollah The Respect MP for Bethnal Green and Bow, 'Gorgeous' George Galloway will be on Talksport in bout 10 minutes giving his balanced views on today's chaos. 1089 MW. Turn On, Tune In, Cop Out.

Update: By his standards it was pretty sedate apart from saying that anyone who disagrees with him 'doesn't understand what I am saying'. However, as much as I dislike him some of his points remain salient. Was nice that he was cut shirt to go live to Dubya whose support of Blair is as unpalatable and stomach churning as could be.