Don't worry dear readers, you didn't really think I'd not post the pictures did you? I have deleted the text that accompanies the pictures because it didn't scan too well.
So in the first picture we see Dot, Pauline and Pat with Patrick Trueman as the Merry Wives of 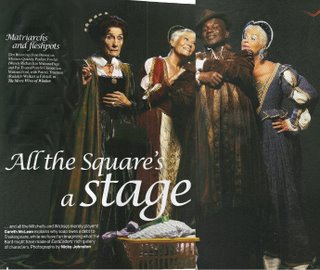 Windsor's Mistress Quickly; Mistress Page; Falstaff and Mistress Ford respectively. I didn't know Mistresses Quickly and Page worked for Mr Theodopolopodous in the laundrette. Lives and learns. In the actual text accompanying it Rudolph Walker says: "Doing this shoot got my juices flowing", well you are standing between Pauline and Pat so I guess you are only human.
Next up we are treated to Johnny Allen as Macbeth. I studied Macbeth for GCSE and don't quite recall the seen where Macbeth shakes King Duncan's hand and somehow levitates him over a bridge resulting in instant death. Anyway next is Phil Michell as Richard III. Well for sure Phil always has the hump (tee hee) but McFadden does pick up a lsight difference between Shakespeare and Eastenders, when talking about studying Shakespeare at Rada he says: "It was like shouting poetry at someone 350 yards away", MacFadden prefers the intense whisper.
Hold on here's Sean Slater, Lola's Dish of the Week if any higher accolade were possible. "It was Shakespeare that turned me on to acting" he muses, well thanks for that Bill.
And there are the fools Minty, Garry and Billy and the quote "I've always fancied myself as a Bottom. Or a Puck." Make your own jokes.
And Chelsea and Deano who don't really warrant comment. 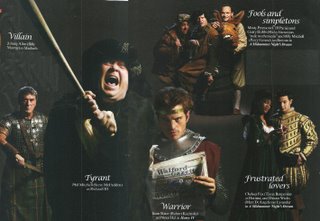 And in the last pictures we have Stacey and Bradley as Romeo and Juliet (hold on, a couple of pages ago Demi and Leo were Romeo and Juliet???). I have also studied Romeo and Juliet and will never forget the line "Romeo, Romeo wherefore art thou Romeo. I'm pregnant".
And there's Max and Tanya - Max looks like an extra out of Carry On Cleo for fuck's sake. And no Eastenders article would be complete without Peggy Mitchell. Now tell me, which Shakespeare play had the fairy godmother in it?
Denise and Kevin also get the Shakespeare treatment, they are apparently sparring partners. That's Parklife, I suppose.
And finally Squeal Beale and Dawn as Hamlet and Ophelia. Because Hamlet, of course, ran a cafe and who can forget Ophelia getting money under false pretences to fund a boob job.
So basically I am not sold on this link but, at least, it has given me something to blog. 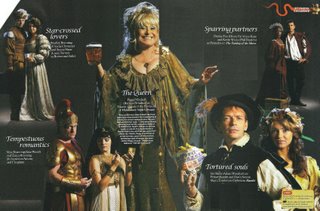 Comments:
Oh. My. God. I don't have the words to describe how exciting this is.

that sean slater looks extra fit in his special outfit.

Dude. It read's like you've been smoking the crack or something! Try acid next time.