The Tale of Two Curries 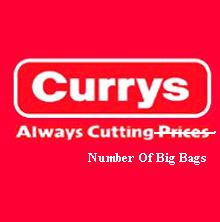 After reading my computer the last rites (not that it was Catholic mind), I was faced with a dilemma: how was I supposed to play Championship Manager and/or International Cricket Captain? I procrastinated for weeks, trying in vain to resuscitate my computer until it became apparent: you can't resuscitate something that's dead (notwithstanding Trinity's resuscitation of Neo in the Matrix).
So I decided to buy a laptop and went to buy one this weekend when I was off visiting my girlfriend in Northampton. So off we trotted to Currys after I had seen an enticing Bank Holiday promotion in the Independent. However, Currys had sold out but the very friendly and efficient assistant pointed us in the direction of PC World (basically the same company). PC World has a strange system whereby you go to some woman (to be fair it could be a chap) who's sitting on a chair in a raised position - imagine a cross between the umpires at Wimbledon and the lifeguards in Baywatch (minus the looks) - give her your name and wait in a queue. Organised anarchy would be the term that springs to mind. Although to be fair it wasn't that organised.
Anyway, as I am waiting in the queue I get called out and informed that the last one has been flogged. So back to Currys to reserve one at a different store. The helpful assistant obliges and all done.
So yesterday I went to Currys in Romford, well just off the Eastern Avenue to be precise and stand around at the Customer Services bit until someone deigns to come in off a cigarette break (was so long the guy may have been puffing a stogie). Anyway the guy I need to see is not about, so after a couple of calls over the loud-speaker and still no appearance I am informed that he is on a conference call and some other ham and egger comes out to help me.
He trots off to get the laptop and when I ask where the added extras are (laptop bag, optical mouse and software pack) he tells me they are not reserved. I politely told him to sort it out as I had no intention of this clown not giving me what I had ordered. Eventually he comes back with the bag and software pack but no mouse. Yes they'd sold out so I am awaiting a call for that. I ask him what comprises the software pack to which he eloquently replies: "It's basically a whole load of shit we just chuck in there." Well, I'm no fan of jargon but that's plain-speaking in the extreme.
He then proceeds to quickly talk me through a couple of installations including the immortal advice: "If you don't back it up you're basically screwed." I then ask him how to set up the broadband connection and the switch is flicked and he's off, years of jacking off to computers are a clear advantage as he speeds off. I managed to catch something about a router but he may have well have been speaking Greek, although I doubt it - he didn't much strike me as the Classics sort. Don't worry I buzzed my old chum Recess Monkey who will sort out the technicalities for me.
To cap off this thoroughly soul destroying episode he said (the usless guy not Monkey) that they didn't have a big enough carrier bag to put the laptop in. Some crap about Currys making cuts so that you only got a certain amount of big bags at certain times of the year. He said: "You wouldn't believe it." Well you said it, pal.
Thank goodness for the brain-trust that is Currys that I just told him to take the laptop out of the box and put it in the laptop bag. When I regaled this tale to Mother Beef, she said "You could work at Currys" - not one to naturally take the mick, she may well have been on this occasion.
All sorted now and, rest assured, I have now started a new Champ Man game as West Ham (couldn't be arsed to start with the Owls as they are always bankrupt at the beginning). So far 3-3 at home to Derby, 5-4 away defeat to Chelsea, 3-2 home victory over Sunderland, 4-4 home draw with Leicester, a 3-0 away drubbing at Middlesbrough and an away victory in the League Cup over Cambridge on penalties after it was 2-2 after extra time.

Comments:
What did you do to your poor computer to make it die on you?

I'm sure it was some crime so horrendous that your punishment was to have to visit Currys for a replacement ;)

I would never have let that happen in my day at John Lewis.

hey wes given ur talents perhaps u should go back to john lewis...

Two things, 1) You said you didn't read the Independant 2) There is no such thing as organised anarchy, just chaos.

1) As a rule I don't read any paper, but the Independent on a Saturday has shedloads of Sudokus and quizs making it tolerable.
2) A quick google search displayed approx 426,000 results for Organised Anarchy. Make your own mind up...

They are all wrong...