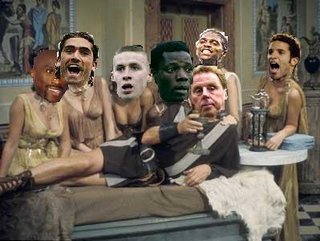 Portsmouth are second in the league. That's higher than Chelsea, higher than Liverpool and higher than Arsenal. After a 4-0 drubbing of Middlesbrough it was a case of Oooh no misses as Kanu, Benjani and Todorov all banged in goals. On the back of a victory over Chelsea it was a case of woe, woe and thrice woe as the Boro came back down to Earth with a bump. So Portsmouth for the Champions League? Titter ye not, it might just happen.

Comments:
If Portsmouth do it for the Champions league, it'lll be more Caligula than Up Pompeii