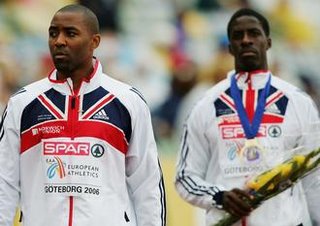 The first time I wrote about cheats in sport it pertained to the disgraced quartet of Italian clubs found guilty, to some degree or another, of fixing matches. Well the second case is that of Dwain Chambers, the man who was going to win medals galore, until he tested positive for anabolic steroids and was banned for two years. His ban served he returned to international competition and was a member of the UK four that won gold in the 4x100 metres relay.
However another member of the quartet, Darren Campbell refused to take part in the team's lap of honour presumably understanding the meaning of the word honour. Campbell has made clear that this is not a personal vendetta against Chambers but his belief that Chambers should name names to break the drug circle in athletics.
In a world where morals and principles are often little more than public utterances, I find Campbell's stance all the more admirable. Campbell, who behind Linford Christie, is Britain's most medalled sprinter ever is set to retire next week.

Watch this video for Kay Burley completely missing the point and exposing the woeful state of reporting on Sky News sometimes
http://news.sky.com/skynews/video/videoplayer/0,,31200-darren_campbell,00.html

That would be former Plymouth Argyle player Darren Campbell then! Little known fact that he was a Mighty Green before he discovered that whilst running fast down the wing was all very well, you also needed some ball skills to be a professional player! Even at Argyle!