Who's the odd one out? 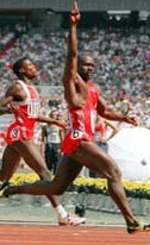 Ben Johnson (Canada) - The most famous athletic junkie of them all. Won the 1988 Olympic 100 metres in a then World Record time of 9.79. Subsequently tested positive for steroids and banned. Stripped of his gold medal and his world record was not recognized. Made a comeback in 1991 but was not the same athlete and was later banned for life in 1993 after failing another test. 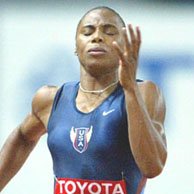 Kelli White (USA) - White won the 100 and 200 metres double at the 2003 World Championships. However, she was smacked up on modafinil and was stripped of her medals. Retired in May 2006 and has since given lectures on drug abuse in sports. Shw should know, I guess. 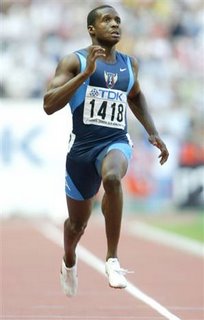 Tim Montgomery (USA) - displayed all the tell-tell signs of a junkie athlete by following up not qualifying for the 1996 and 2000 Olympics 100 metres by breaking the world record in 2002 with a time of 9.78 seconds. Not even subtle that one. 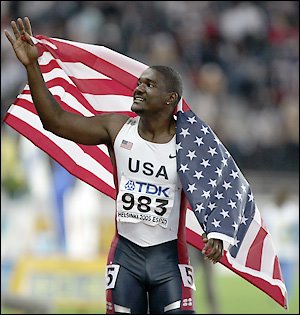 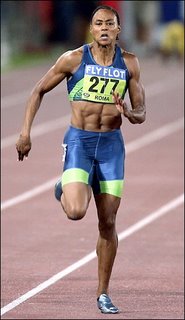 Marion Jones (USA) - In 1997 and 1999 Jones won the 100 metres gold at the World Championships, she also won bronze in the 1999 Long Jump. In 2000 she won gold in the 100 and 200 metres and third in the Long Jump at the Olympics and in the World Championships in 2001 she won the 200 metres and came second in the 100 metres. Her drug trial is currently in the news, so would be unfair to say she's guilty. she is probably guilty. Has had long-term relation with C.J Hunter, the American shot putter and Tim Montgomery (see above) both are athletics junkies. 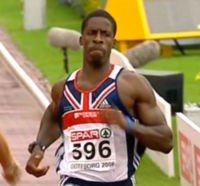 
Point being that basically even when drugged up our boy comes in 4th.

Comments:
He he he. Nice work BB