Behind every great man is a Bliar, or is there? 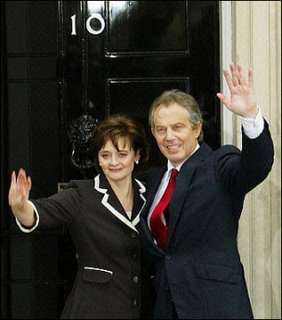 My goodness me. It's Labour Party Conference and what's the biggest scandal thus far? What Cherie has (or perhaps hasn't but probably has) said. Such blogging luminaries as Guido Fawkes and Iain Dale have brought this scandal to the publics' attention.* It appears that Cherie has been somewhat forthright in slating the heir apparent, Gordon Brown. And what? Cherie is not a Labour Party MP nor is she in the official employ of the Labour Party.
Let's face it, people have always had it in for Cherie. Whether it is because she is a successful QC; or because she has a face that is prone to gurn; or because she is not a supermodel - everyone's happy to have a dig. I'm not casting stones, do what you want; let's face it the main purpose of the Blogosphere is to throw sh*t at/take the piss out of famous people. I love doing it myself. But type Cherie Blair into google images and see the cornucopia of images, she appears to suffer more than most.
But forget about all alleged past misdemeanours this time she's done for: she's been accused of calling Brown a liar and extolling the virtues of Alan Johnson to anyone within earshot. Of course, this whole episode misses the issue totally - through Cherie's denial granted - but the fact is that Brown is a liar. It is galling for him to be standing up to Conference and brazenly saying how much he has enjoyed serving Tony Blair. Who is he trying to fool? For once, even Mandy is right. Well done Cherie for saying what a lot of people think. And the minute she says something there's some lickspittle (NB: not a word only for NuLabour) hack salivating at the prospect of sticking the knife into someone who is saying what she believes. Actually standing up for her husband. Loyalty you might say. Who does she think she is?

* Not wishing to be self-aggrandizing they often proclaim the 'dead tree press' - so much more cutting (Get it? You cut trees down...) than newspapers - to be dying becuase they're not telling people what they want to read.

Comments:
I see the wisdom of your words now. Last nights conversation seems oh so pointless and fruitless. Oh the shame of it.