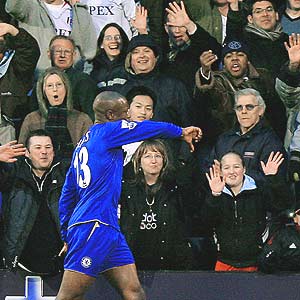 The continuing saga of the Ashley Cole/William Gallas transfer is set to...ermmm...continue with Chelsea claiming that Gallas threatened to score an own goal, get sent off and generally play badly if he was forced to play for Chelsea. Charlton paid Liverpool £2 million for Djimi Traore to assume the self-same role. Boom, boom.
Gallas fell out of love with Chelsea and it seems this was caused by Mourinho insisting on playing Gallas at left-back (he prefers to play at centre back) and other Chelski superstars being payed more. I'm sure Gallas' wages left him virtually penniless and destitute reduced to begging for alms on the Kings Road.
I would not be surprised if Gallas sues Chelsea or Chelsea sue Gallas or Mourinho cuts some bitter and insulting promo during a press conference. Loads more posturing. This whole transfer has been a disgrace. Cole and Gallas are two of the finest defenders in Europe but have sulked through the Summer like a couple of adolescents, granted a couple of loaded adolescents.

Comments:
Chelsea have handled this really really badly. This is such a surprise seeing as they have Peter Kenyon as their Chief Executive, a man of honour and integrity.

I mean, who really noticed Gallas bitching at Chelsea? Was it front page news? Don't recall myself. So rather than ignoring it, let's whip up a storm by slagging him off on our website. That'll teach you to say we don't 'ave no class!