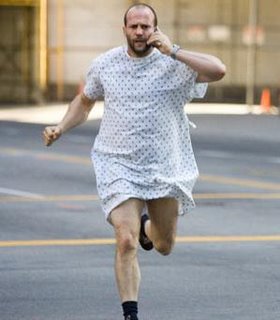 I don't know why, but I love films that are rubbish. You know the sort? Films that are so bad that they become pretty good, i.e. Jean Claude Van Damme movies. Last night, I went to the cinema to watch Crank starring Jason Statham. Now Statham has stunk out cinemas previously with efforts such as the Transporter (the funniest non-deliberate comedy I have ever seen); Transporter 2; Lock, Stock and Two Smoking Barrells and Snatch.
The stupid premise of Crank is that Statham, the gloriously named Chev Chelios, has been injected with some synthetic Chinese shit that will kill him and the only way he can prolong his life is by increasing his adrenaline. So he gets his adrenaline highs by snorting coke, chugging Red Bull, inhaling multiple nasal sprays, getting jolted by defribilators (really...), putting his hand in a waffle iron (really...), boning his mrs in the middle of china town (really...) and getting head during a car crash (with 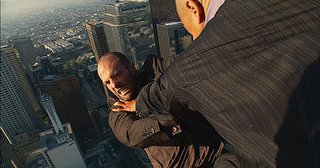 his girl saying "Oh Chev, you're so big" You just know Statham wrote that line into the script himself!!).

He is referred to as an adrenaline junkie but as in all his films he comes across as being a Grade A asshole. The best part of the movie is when Chelios propels himself out of a helicopter, he is plummeting to his death but has the clarity of mind to phone his girlfriend and leave her a farewell voicemail. Yeh, he's in free-fall and still has reception on his phone.
I w 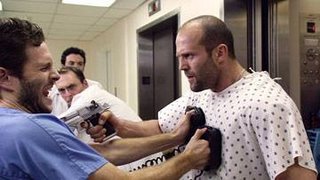 ould recommend this to everyone in the world because it is so stupid, it almost defies belief.

Whilst the rest of his films are rather poor, I thought Snatch and LSATSM were both very good.

Transporter should be on the National Curriculum it is so funny