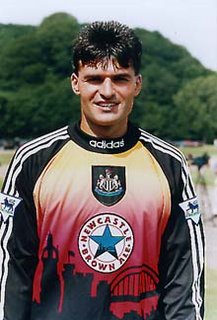 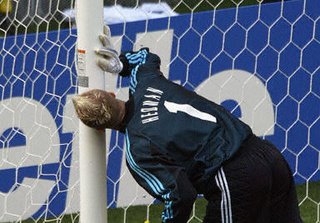 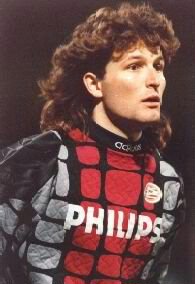 After Marlon Harewood's near criminal tackle on Newcastle keeper, Shay Given. Newcastle found themselves in a quandary. With Given, their #1 keeper, out for months with a ripped bowel; Roder has realised that he is left with Steve Harper, a decent enough keeper (despite his comical attempt to save a Xabi Alonso shot from a couple of miles away) and...well, that's it. So looking for an emergency back-up keeper Roeder is desperately sniffing around a number of old men. By that, of course, I mean veteran keepers. Names in the frame include Magnus Hedman (33) - who I thought had actually retired; Pavel Srnicek (38) - pictured wearing, perhaps, the worst keeper's top ever and Ronald Waterreus (36) - who you can see is a closer match to Pauline Prescott than Vicky Michelle ever will be.
Who else is going to be in contention? Neville Southall? Bert Trautmann? The mind boggles. Hopefully, he'll bring in Magnus Hedman whose crack-a-jack wife would be a welcome addition.