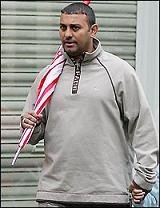 Naseem Hamed, formerly one of the best boxers in the world, will today be released from the clink after having served only 16 weeks of a 15 month sentence for dangerous driving.
Hamed was imprisoned for driving 90mph down the wrong side of a carriageway hit another car whose driver suffered fractures to every major bone in his body. So not that serious, eh?

After serving less than a third of his sentence, to get picked up from nick by a stretched limo is really taking the piss.