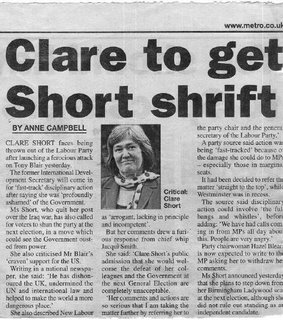 Parliament is set to lose one if its most forthright members, as Clare Short has decided to stand down as a Labour MP. She may stand as an Independent in her Birmingham Ladywood seat. Expect many a bitter outburst from Ms Short during the remainder of her term in Parliament.
I don't particularly respect her and feel that her stance over Iraq was bordering on the egotistical/naive belief that she could hold more sway over Blair than Bush (or Blair's own thinking) regarding Iraq.
Anyway, the Metro, hardly a beacon of light in the pool of British journalism, report Short's standing down as above. If you want to read it, which I wouldn't particularly encourage, just click on it, but the humour of it is when you look at the whole page. There's the article and the photo of Clare Short; all balls and venom, but look to the side and there's a photo of Tony waving.

All together now: "Bye, bye Clare." 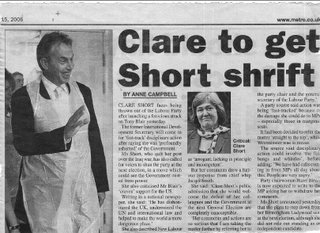