ODIs getting a bit more spicy 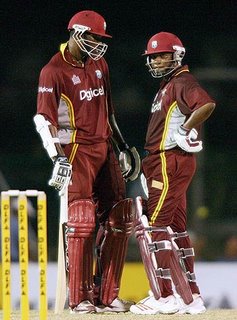 England's woefully sub-standard start to the One Day Internationals against Pakistan (together with the capitulation against the Sri Lankans) did not bode well for the Champions Trophy. However, a couple of victories and a shared series against arguably the second best one day team in the world later has restored faith, or should that be hope, in England's chances.
Thousands of miles away, the West Indies upset the Aussie apple-cart by giving them a good and thorough spanking like only the Windies can. For those who don't know the Windies are my second favourite cricket nation and I am always the happiest Bull in the barn when they are victorious (that said I am equally happy when England humble them; see series of 2000 and 2004).
Stand-in captain, Mike Hussey - undoubtedly the find of the season blasted his maiden one day international century and helped by Brad Haddin, the Aussie stand-in keeper, smashing 70 a total of 272-6 looked good enough.
One thing I hadn't predicted was Chris Gayle and Brian Lara both hitting top form in the same innings. I am particularly happy cos these two are in my all-time favourite XI. Chris Gayle, the languid yet destructive Jamaican opener and Brian Lara, Trinidad and Tobago's imperious genius helping the Windies to victory with over two overs to spare.
The Aussies are all very good at mouthing off and, tobe fair, they are the best in the world; but they have big problems. Their team is ageing quicker than Fabrizio Ravanelli and although they will probably regain the Ashes, I think the cricketing world order may be set for another shake-up.