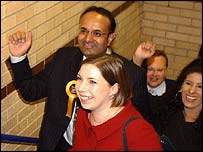 It comes as no surprise that a story I was going to blog has already been covered by Kerron Cross, the #1 in Labour bloggers.
The thing is the Liberal Democrats and women. Led heroically by Sir Mung Bean Campbell they are set to tackle the issue of female representation. Or lack thereof. Whilst Labour have persisted with the All-Women Shortlist, which whilst unpopular in some circles has tackled an issue and has sought to change what is fundamentally undemocratic; the Conservatives threw a £400-a-head summer ball employing, bikini-clad women to serve drinks. However, the Liberals are going to pay (bung) Lib Dem local parties some serious wonga for selecting women. Across the blogosphere, Comrade Monkey would probably bung someone a pint or thirteen to select Sarah Teather.
The world awaits Lib Dem suggestions for selecting people who aren't white. Isn't it a touch shameful that the Tory Party have more non-white MPs than the Liberal Democrats? Maybe free vegetarian curry classes for local parties that select an Asian candidate? Or free reggae musicians to play the fundraisers of local Lib Dem parties that select a black candidate?
What a shower.