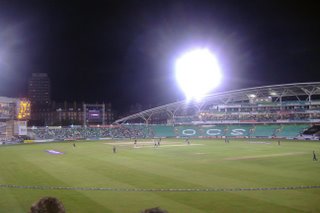 Had the pleasure of going to the Oval yesterday for the Pro 40 match between Surrey and Gloucestershire. It was a lovely sunny day and laden with beers it was the way to spend the late afternoon/early evening. Surrey started brightly with James Benning (an outside call for the England One Day International team) and Scott Newman putting on a 100 in quick time for the 1st wicket. There were also half centuries for Ramprakash and Jon Batty and a total of 278-6 looked formidable and after quickly losing Craig Spearman (run out) and Philip Weston (caught at mid-on pulling) things looked bleak but the Aussie, Ian Harvey and the Kiwi, Hamish Marshall batted superbly. In one Schofield over (a good chant of England's #1), Hamish spotted the 'other' ball - the full toss - and dispensed it for six. Schofield then spun down the 'mystery' ball - the full toss - that was also swiped for a maximum.
And even two late Schofield wickets couldn't prevent Gloucestershire from sauntering home with 11 balls to spare.

Comments:
Good to see you last night Barry, certainly a most enjoyable game and I reckon we should release our "England's Number One" chant as a single. It certainly took off at the stands of the Brit Oval. Hey, we could get Michael (or is it Martin) Ball to sing on it!

Funnily enough Barry, I too was there and sitting about ten rows down and twenty yards to the right,by the looks of it.