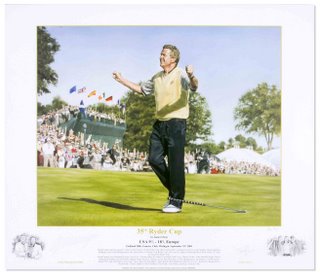 Is it possible to tire of beating the US? Ever since they touched down in Ireland wearing the country gent get-up they have been asking for it. Did anyone see any of the US Big 3 (Woods, Mickelson and Furyk) smile at all? There were two hole-in-ones. Watching the singles on Sunday was just so good. Putts being sunk everywhere: Cink thrashing Garcia was something to be seen. I was happy that Dudley Eyebrows (24) had been listening to the Radio 5 Live coverage and heard the commentary that the ball was: "scampering away like a disobedient schoolboy". Top notch.
Inevitably, talk has switched to Darren Clarke being named Sports Personality of the Year. Ok so he is infintely more deserving than David Walliams. It's great that he appears to be overcoming his loss and can go about his life again, but Sports Personality of the Year. Gimme a break. All you hear about the Ryder Cup is this bollocks that Europe have started to win because they play better as a team. Personally, I don't buy too much into this thinking, but as Europe has won the last three Ryder Cup there may be something to it. Accepting that there is; what is the warped thinking in singling out one player from the collective of 12 for special adulation? Bereavement should not be considered in this issue. Sorry if that is heartless, but it's the way I see it.
And there was Monty, the most genial chap you could wish to find on a golf course. After every putt, Monty gives that little nod to crowd. It cracks me up, like the captain of my cricket team who will clap his bat on his glove after receiving a particularly good ball. Speaking of the big guy, I found this picture on eBay, it would make the ideal gift for someone you don't like a lot, I mean look at it? Who would hang that in their house? And no bidders? Quel surprise. And where are his man boobs?
Coincidentally, was nice to see the Observer's amateurish coverage of golf's premier event. Padraig Harrington was written as Hamilton, and Friday's US Foursome team of Stewart Cink/David Toms was referred to as Stewart/Cink.