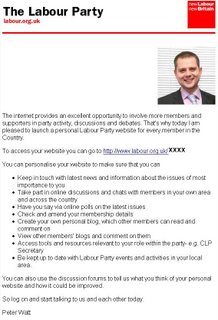 I am a Labour Party member and whilst I am loyal to the Party, I don't mind having a dig when they are being rubbish. And then this email from Peter Watt floated into my Inbox. This really is a stupid idea. Unless, of course, they will accept some bloogers not signing from the same hymn sheet as the official line. Which I can't see happening, especially on a Labour Party url.
You know during my time in the Party, I have suffered electoral defeats galore; begging-bowl emails from such socialist luminaries as Jo Brand and Grant Mitchell and regular updates from London Young Labour but none have had me scratching my head as much as this crap idea.
Sometimes I really do despair, but given that Cherie walked out of Gordon's speech this morning perhaps the spirit of criticism may live again.