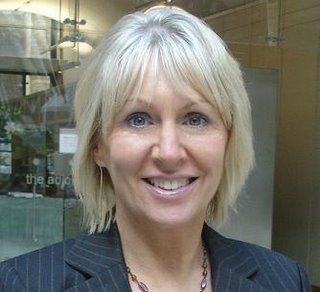 At the moment I am sitting in the office watching Nadine Dorries put forward her 10 Minute Rule Bill on reducing the time limit for legal termination from 24 to 21 weeks. Please excuse me for not offering the most balanced viewpoint but I cannot believe we have a Tory MP, a Tory woman MP, a Tory woman MP who used to be a nurse standing up in the House advocating such retrograde bollocks. Nurse to leading light in fight to reduce the limit for abortion; kind of like poacher to gamekeeper.
Dorries concluded by commenting that many more Members in the House knew more about the subject. It would have been closer to the mark if she admitted, as she did (so I believe) to Abortion Rights that she had not collated any scientific evidence that supported her campaign. On her website front page Nadine Dorries is pictured with a Harley Street practitioner who calls for the limit to be reduced to 18 weeks. Even the misguided Bill only asks for 21 weeks. However, far from being discouraged - or ashamed - she sees her campaign as popular. Populist politics, eh - can't beat it. Never fear though as she has apparently employed a PR firm to promote her activities. Fuckwit and Fuckwit were sadly unavailable for comment.
Chris McCafferty, the Labour MP for Calder Valley (and formerly my next door neighbour) spoke against the Bill and spoke well. I think it is rare for a political issue to be so polemic but this is: it is right vs. wrong and Nadine Dorries and the hordes of 'religious' Britons who, I don't doubt for a moment, will be inking their quill and salivating at the prospect in equal measure, are wrong.
Only 1% of abortions happen between 21 and 24 weeks.

Comments:
I'm pretty ashamed to say I used to know her. Pleasant enough; but right wing awful politics then and not much has changed.

...forget the politics, to think that if she was ten years younger and in a nurses uniform...Mmmmmmm.

Actually she is quite a tasty chick...