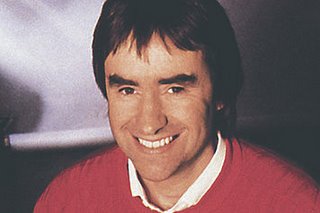 Chris de Burgh. A name that kind of makes your skin crawl. I don't want to be particularly harsh but just looking at him is a bit...weird. It's the bushy eyebrows, I think. Anyway, he can't be all bad, one of my ex-bosses used to be in his fan club. However, to the point of this post, I came across a story that Chris de Burgh can turn his hand to faith healing. Laying hands on and relieving pain. De Burgh made the admission on the Heaven and Earth show declaring to Gloria Hunniford that: "I have found myself able to cure people with my hands. I met someone in the West Indies who was not able to walk. I put my hands on him and he was able to get up."
Quick tip Chris: if you'd have sung to him he'd have been able to get up, run and in all likelihood break the land speed record.

of course. sorry kerron i forgot your a regular viewer of the Heaven and Earth show.

Does anyone know if he's got an album coming out or something? He's been doing a lot of press then "suddenly" he's going on about being a god squadder.

He's not all bad. His daughter did win Miss World in 2003. Hubba hubba

REEESPEK to the man who gave the world the second greatest socialist anthem ever. May she dance the dance of comradeship for all eternity!