End of the Short Parliament 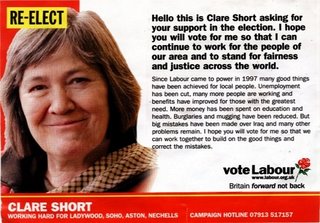 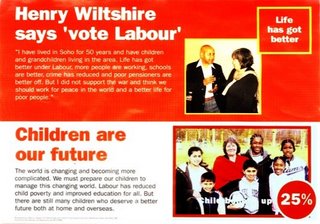 She's gone, out of here, soon to be forgotten. Yes it's Clare Short, the newly liberated and independent MP for Birmingham Ladywood.
It links in neatly to the point I made with regards to wearing the veil. Clare Short canvassed the people of Birmingham Ladywood (and the election literature below would have been put through the letterboxes during this campaign) as a Labour Party candidate and less than 2 years later has left the Party, so how honest was she being when she was canvassing for the 2005 General Election? Her resignation is hardly a conversion on the road to Damascus with the venting of her spleen, anger, frustration, bitterness and bile (if these can all be vented), in the direction of the Labour front benches and the media alike, a common occurence. These thoughts of dissent from the Labour Party were not recently sown, my point being that the people of Birmingham Ladywood voted for a Labour MP and are now stuck with an Independent member no-one voted for. Please note the enlarged coloured font for the enraged tabloid effect.

Comments:
Spot on Barry! And she's saying one reason she's gone is the "deceptions and half truths to get us to go to war in Iraq". But hang on, wasn't the Iraq war in 2003? Yet she still felt able to be a Labour candidate at the 2005 election! Oh but then she does have a track record of dithering to hang on to office, doesn't she. I'm not that keen on ex-Ministers who suddenly discover their consciences when they leave office. Short's prinicples stand in stark contrast when compared to those of the late, great Robin Cook or John Denham, who I may disagree with on the war, but at least they had the principles to resign before it happened!

20% swing against her at the General Election.

This has motivated me to edit Ms Short's wikipedia entry re the UN bugging affair. The last paragraph is my addition - i believe it accurately rounds off the section

Yes, Clare Short, the invasion of Iraq was a bit of a cockup wasn't it?

That didn't stop you voting for it, of course...

We have above elaborated the fiction of a primitive psychic apparatus,whose work is regulated by singlefrauen the efforts to avoid accumulation ofexcitement and as far as possible to maintain itself free fromexcitement.

If I had canvassed for her at the last general I would be raging right now. She is clearly on a complete ego trip.