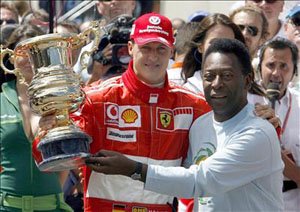 Every sport has its figureheads. Sportsmen/women who reach beyond the afficionados and appeal to (or are at least recognised by) others. Football boasts the likes of Maradona and Pele, cricket has Viv Richards, darts has Phil Taylor, Steve Davis and Stephen Hendry did it for snooker, Muhammed Ali for boxing, Richard Branson for failed hot-air balloon missions and, of course, Michael Schumacher for Formula 1.
However, my issue is that I find Formula 1 chronically dull. Seriously, watching cars go round in a loop about 70 times with the results incresingly determined by the speed, braking power and technical reliability of the car rather than the skill of the driver. Vroom vroom a car has gone past. Vroom vroom another car has gone past. Vroom vroo...splutter, splutter a car has broken down.
Anyway I thought I'd brave the Brazilian Grand Prix and see Schumacher off. His domination of the sport will probably not be repeated and he did, of course, barge Damon Hill off the course about a decade ago in something that almost approached excitement.
So I watched it, got bored, couldn't see Schumacher, got more bored, eventually saw Schumacher miles behind cos of a puncture and try as I did, and please believe me it was some little effort, it's was boring.
So Schumacher ended up finishing fourth, didn't win the Championship, didn't get up on the rostrum for one last time, and didn't waste perfectly good champers by spraying it over the winner in one of the most patently homoerotic sporting practices. The highlight for me was when they cut from the action to show Schui meeting Pele before the race. Not hawking viagra this week, Pele? What a media shower. Pele and Schumacher. Two greats, two legends - but from two different (and not even remotely similar) sports, which surely makes the meeting pointless. I know the Grand Prix was in Brazil and Pele is Brazilian, but please...ok I admit it, I am a far bigger Maradona fan than Pele.*
Keenly await next season, which I am certain will be...boring.

* although Pele ruled in Escape to Victory as Luis Fernandez: "Give me the ball. I do this, this, this, this this (illustrates running past the opposition by drawing zig-zaggy line on the board)....GOAL!"

Bollocks!!! You don't know motorsport until you've lived it.I find football dull as a three month old shit. A bunch of poofers running around on a field kicking some tired old football and feigning injury at any moment 'cause they are too crap to score a goal so they go for a penality every time. Whats the fun in that? Not only that but most of them are a bunch of spit roasting, coke sniffing, tax envading pre-madonna's. You call that a great sport? Bollocks.

yeh ur right. on reflection driving a car is far more taxing

OK... Barry asked for my thoughts on snooker so... here is my favourite whe thinking of the best sport ever...

Bill Werbeniuk bends down to take a shot. Being a large fella, as he does so, his trousers split all the way from his arse crack to his navel. All you hear is a loud and protracted tearing sound.
Silence follows except for a few gasps from the audience.
Then the BBC commentator says, "There appear to be three pinks on the table."

Did you know that the G-Forces experienced in a F1 car are comparable to flying a jet fighter? Have you seen David Coultards neck muscles or een his jaws for that matter. Now he didn't get those from straining while taking a shit......