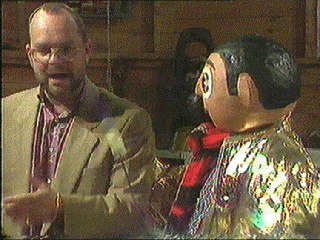 James Whale, the ever opinionated twat DJ who currently resides chez TalkSport, has announced that he may be UKIP's next London mayoral candidate, although this has not been confirmed by UKIP and, yes, this is the self-same James Whale, who taking an opinionated stance, defied the dictum not to pronounce political allegiances on-air in the run up to the 2005 General Election by urging listeners to vote Tory. Yes Tory, not UKIP.
Whale is hardly a political sage and it appears his outlook has been shaped through talks with new UKIP top honcho, Nigel Farage. Wow, that's one hell of a political mentor. Lucky his conversion wasn't courtesy of George Galloway (on the MOTHER of all chat shows) or you could have this buffoon standing for Respect.
Whale, in his thankfully inimitable fashion, declared that he would seek the advice of such gurus as Jamie Oliver (for diet); Peter Stringfellow (for pub and club measures) and Lord Archer (for perjury). It remains to be seen whether Frank Sidebottom (with whom he is pictured) will be his paper-mache spokesman.
I have never been a fan of James Whale and once came across a site which summed him up to a t. It should also help those like Comrade Hamburger not blessed to know who this goon is:

James Whale (so called DJ and TV phone in garbage)

the word c*nt really does not cover this odious f*cker. The english language fails to have a word that properly describes the overweight, perspiring, oafish hog. C*nt shall have to do. *None* more c*ntish...
I was going to add that Gary Bushell fits into this category but he is below Whale. I don't know how that's possible but it just is. Whale's a Category A C*nt.

Nice excuse for a photo of Frank Sidebottom on your blog there! I was hoping he would be the Lib Dme mayorla candidate!