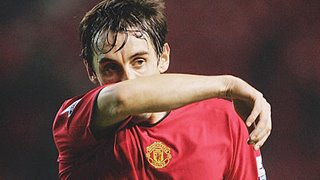 About an hour gone, England are struggling 0-0 with a country whose last famous inhabitant was Colin Farrell. A Crouch header is parried by the keeper, the ball falls to an English player; it's an open goal 1-0. Time to wrap it up. OH NO. It's Gary Neville, he's missed; put it over. From his reaction he knows how abjectly terrible he's just been. English fans around the country throw expletives/pint glasses/their wives and children at the screen. And then there's old father time, the institutional tosspot himself Motson trying to pass it off as a good effort. "And Neville's shot scrapes the top of the bar."
All in all a lamentable, piss-poor, amateurish performance. And that's just Motson. Ok so Ledley King played well. That aside? Nothing. If it hasn't been coined already, may I humbly offer "SACK STEVIE MAC"

Comments:
While most people accept that Maccer is a ruddy faced tactical dullard, it does seem a bit rash to start calling for his head three games in Barry. I thought better of you than to be at the forefront of the bandwagon.

yes, you're quite right. 'a ruddy faced tactical dullard' should be given a lot longer.
this is the guy (i.e. me) who when Scolari got offered the job did a big 'Thank God it's not McLaren' only to have to take the post down when Scolari did a u-ey.
Surprised he didn't go for 4 strikers at the end.

OK. Fair point, Bazza. But what we can do? He aint gonna go after 3 until Euro 2008 is he? Unless we do really really badly and lose to Andorra.