Labour pigs! Who's going to save Lord Winston's bacon? 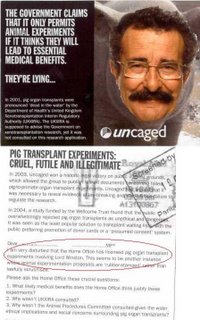 Animal testing? Booooooo. Lord Robert Winston? Yay. Ying and Yang. Bad and good. How cruel, therefore, that the two become unbreakably linked? But don't fear, Lord Winston has not turned to the dark side, but look at this then.
"The Government claims that ot only permits animal experiments if it thinks they will lead to essential medical benefits. They're lying...". Scandal. They really are giving Monkey's fags and dressing them in waistcoats and fezs for no other reason than a SICK joke. Some of them even juggle.
This is a campaign card sent to MPs by the bucket load (of pigs' swill). The standard campaign card has Dear...and then something to ask their Member to do. Something like; please sign EDM...or please write to the Minister/Secretary of State, you know the score. So what does this card say?
"I am very disturbed that the Home Office has licensed pig organ transplant experiments involving Lord Winston." Noooooooooo it's just like 28 Days Later, but without animals being injected with hate and anger they are being made...really clever. The Lord Robert Winston pig may become a member of Mensa. The Lord Robert Winston pig may be permitted to sit in the House of Lords. It is also rumoured that the Lord Robert Winston pig has been offered a lucrative BBC contract to host boring and underwhelming pseudo-intelligent programmes. To echo the words of Charlton Heston (later replicated by Jay): "God damn you. God damn you'se all to hell."

Comments:
I've never seen Recess Monkey dressed in a waistcoat and fez. Or juggle. If he's an evil Government experiment though it might explain a lot!

Hi, i was looking over your blog and didn't
quite find what I was looking for. I'm looking for
different ways to earn money... I did find this though...
a place where you can make some nice extra cash secret shopping.
I made over $900 last month having fun!
make extra money

These animal rights extremists realyl are beyond a joke now. Next they'll be experimenting on Barry!

I work for a London based charity, and had a poster of select cuts of meat up behind my desk (one of these wall charts the Independent and Guardian are publishing). First I come back from lunch to find that someone has put a poster of vegetables across it. Then I came in this Monday morning and found someone had stuck masking tape across it!!!

The extremists in my office are now going to the extent that they will come in at the weekend to vandalise my poster!