McDonnell set to fall before the Starter's pistol? 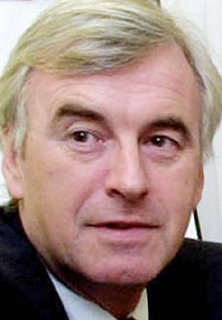 In news that is set to upset his close political ally, Cllr Kerron Cross it appears that the closest John McDonnell will get to the Labour Party leadership is his rather flash and impressive website John4Leader. First it came to light that he had upset another leading light of the Left (when he's not in the Government...) Michael Meacher by announcing his bid for leadership without consultation. You can't blame McDonnell can you? Consultation would be one of the higher scoring words in New Labour bullshit bingo, but anyway...
It has now emerged that ex-Chair of the Campaign Group, and current member, John Austin, MP for Erith and Thamesmead is set to nominate Gordon with Hilary Benn as his preferred lieutenant.
Somewhat pisses on your chips, eh? The problem, of course, is not the opinion of this author but rather the numeric difficulties John McDonnell is going to have in obtaining enough nominations from Labour MPs. I was heartened when McDonnell scored high in the Union popularity stakes, but I think (I may be wrong, but doubt it) that a percentage of his support came from Unions that are no longer Labour Party affiliated. In effect, they are of about as much use as a left-handed polo player (as HRH the Prince of Wales, old Etonians and other horsey people will testify, polo can only be played right-handed). Well, I can tell you this for free, this Bull is happy to have withheld financial support for the McDonnell campaign (despite numerous 'alms for the poor' emails with the nudge, nudge, wink, wink to the proles and Trots; "You won’t be surprised to hear that this campaign has no millionaire backers"* - none of these emails, interestingly enough, in reply to a couple I sent him. Alas he's a busier man than I)

* It may, or may not, be welcomed if you stuff a crisp £20/£50 pound note in McDonnell's shirt pocket if you see him round the House. "I'm sorry to hear you have no millionaire backers, maybe this will help?"

Comments:
“Wondering Labour Party, so lost, so helpless, yearning for my guidance…”

that's quite the ego you have going on there Phantom