My Sweet Lord - Harrison's back

This is the news that will shock the world. A-Force, Fraudley Harrison has got himself a Commonwealth title match against Matt Skelton on 9th December. Wow that's like Christmas come early, if only by a fortnight. Some may recall that Skelton won the belt off Danny Williams after Williams had previously beaten Skelton in a defence. Previously Willaims has beaten Harrison. So using my unique knowledge of mathematics, I will give each fighter a letter: Skelton (a), Harrison (b) and Williams (c) and deduce that any combination of these letters will result in a shit fight (sf).
Couldn't it just be arranged to throw them all into the ring? Just like a WWE fatal three-way? At least, it might be entertaining. Steel chairs, timekeeper's bell, sledgehammers... 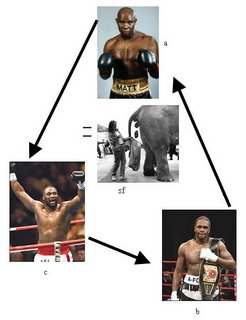 Comments:
The Skelton/Williams matches were not too bad at all mate. Skelton to beat Harrison probably a knock out in the 8th.

I entirely agree. They should fight until there's a winner, rather than until the audience gets bored and they score them on points.

I was on holiday recently and came across something called the Pride Grand Prix on the television - a boxing/kick-boxing crossover that was ten times more entertaining than Audley has ever been.

Skelton is a boxing/kickboxing crossover. Prior to his boxing career, he was indeed Mr Kickboxer extraordinaire.