Now this McGrath is worth listening to 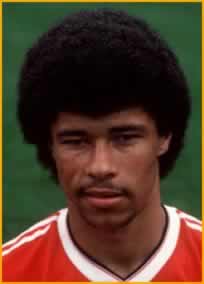 Of course I am referring to the ex-Manchester United, Aston Villa and Republic of Ireland defender Paul McGrath rather than loud-mouthed pantomine baddy, Glenn McGrath. You see when Glenn stats off, you drift into the twilight zone...5-0...Monty's soft...yadda, yadda, yadda.
But Paul McGrath? Well, I respect him loads. He was an incredibly talented footballer and it's a shame that booze and dodgy knees robbed him of his full potential. Anyway, when asked in a Guardian interview what he made of Steve McLaren his answers were prophetic and insightful. McGrath played for Derby in the 1996-7 season when McLaren was serving as Jim Smith's number 2:

"I'm amazed at Steve's rise. You could tell at Derby he liked patterns of play and all that stuff but it's simply amazing how quick it's happened for him. From obscurity he was suddenly picked as Sir Alex Ferguson's No2. If he hadn't been given that break at Manchester United it would never have happened...You have to have so many gifts as an international manager. Fair play to him being nominated for the job - let alone getting it. But it looks a step too far . . . an England manager has to have special skills and nerves of steel. There were a lot of young lads in the dressing room, cocky kids who weren't exactly gentle. Some of the more surreal memories are of how utterly dismissive a few of them were of McClaren . . . some of them devoured him."

I reckon there might be some pretty public dissent soon enough if England don't return to winning ways asap. Paul McGrath: you're a great man, you were a great footballer, you had great hair and you don't rate Macca.

Comments:
An element of jealousy you think???

I don't think McGrath has anything to be jealous about.
Him and Ferguson had fallings out - due, in the most part, to McGrath pissing it up with Norman Whiteside and Bryan Robson, but McGrath recognises this and candidly admits that if he were Fergie he would have chucked himself out far sooner.
McLaren has not done enough to warrant getting the England job. Number 2 at Derby, Number 2 at Manchester United, manager at Middlesbrough (where Gibson must be the most loyal Chairman in the country) and water-carrier, tactical aide de camp to Svennis.
Even your Allardycea and Curbishleys are better qualified.

You might be interested to know that when Nelson Mandela visited Ireland (quite soon after his release), he was met at the airport by chants from adroing fans of (and i write phonetically) "Oh-Ah Paul McGraaa, Oh-Ah McGaaa's Da'"

Hang on Barry. Don't you think you're selling McClaren a little short here? Afterall, he did also coach the reserves at Oxford United

as ever, u r right. Macca was the best thing to happen to Oxford since: Mark Lawrenson (football manager); Robert Maxwell (football Chairman) and the university - i couldn't rank these in order of importance.