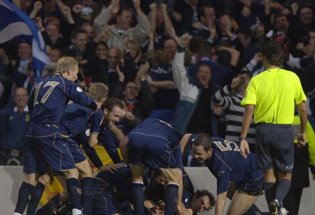 I'll put my hands up and admit that I appear to have done wrong. I did not give the Scots a cat in hells chance of qualifying for the European Championship. But so far so good and the horror years of the Berti Vogts reign are fast becoming a distant memory. Their 1-0 victory over France was just amazing, so congratulations. Sadly, the group doesn't get any easier and I still don't think they will qualify but out of all the Home Nations the Scots turned in the best performance followed closely by Northern Ireland.
And what is it with the Scottish upsetting the French? Not satisfied with Rugby Union they move to football.

Comments:
The Scots done well, one of their best results ever! Can we please swap Gary Neville for Gary Caldwell?!?