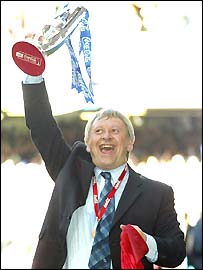 Paul Sturrock is now the ex-manager of Sheffield Wednesday. It's easy to point the finger and say good riddance to bad rubbish, but I would be lying. Sturrock struck me as someone who had a vision for the future. Yet Wednesday are struggling and losing to Colchester Utd 4-0 is shockingly bad. The performance was perhaps worse than the result indicates.
I am surprised he has gone. For one who is going to succeed him? Wednesday are a big club but perennial under-achievers and more importantly the whole team needs an overhaul. We need a new keeper, we could do with another centre-back, and we need a bit of creativity in midfield. A winger and a quality striker would help but it's not Christmas. Yet.
It's a shame as he had just celebrated two years in charge of Wednesday and, personally, I thought he was the right man for the job. However, one point remains: Wednesday are already in a relegation cock-fight but we are yet to play the majority of the good teams. It may well be a very long season.

You've just got rid of the best manager in the league! He just needs a bit of time and trust. At Argyle we were really sceptical when he was appointed but he was given a bit of time, we trusted him when he brought in unknown players like David Friio, Romain Larreiu and Graeme Coughlan (now of Wednesday) who turned out to be 3 of the best players we've ever had! Result? Two championships in 3 seasons!

He did get you promoted in his first season in charge.

But you have played one of the good when you beat us in August.

it's going to be Gary Megson. can feel it...

Farewell Paul Sturrock. You will always be King my friend.

Thanks for the memories...

Bryan Robson? What the F is Bryan Robson doing in a list of good managers? I really feel for Wednesday, and still regard them as a 'big club' very much like Forest.....which means sod all when you are battling for points in the lower league, except the fact that smaller clubs put in a bit more effort when they go to Hillsborough or The City Ground.

I think about half of the football league could claim to fit that description whether it be down to a glorious past or coming from a large City yet there is only room for 20 places for teams in the Premiership. In the Premiership you now have teams like Fulham, Wigan, Charlton and Watford - all teams that are not particularly big but have achieved a lot in recent times. Supporters of these so called "Big clubs" ought to get things into perspective and can learn from these "lesser" teams.

Elephunt, you really worry me