Trust me I'm (not) a doctor 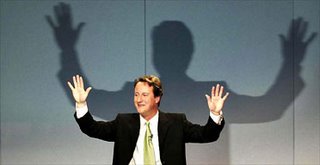 Would you trust this man? So it's not about education anymore, but rather the NHS. Oh ok Dave. Presumably you could fund all this by totally cutting funding on Alzheimers and Amnesia drugs so that no-one can remember Tory health policies like the patient passport? Or what his lot did to the NHS when last in power? Like having people dying on trolleys awaiting medical attention? A time when even such political aficionados as Dennis Pennis could get one over on the then Health Secretary of State Virginia Bottomley by saying: "Hey Virginia, do you want to buy my two bed bedsit as a hospital? I mean I'll take out one bedroom to make it more realistic."

Comments:
Cameron is a Grade A shithead, why he's saying the NHS is "safe" when its a busted flush is because he reads from the same songsheet as Blair. No amount of money will fix it. Better to kill it now. I somehow feel that the crap that youblame on Bottomley is simply the sign of decay of a rotten edifice. No one's got the cahones to say so.

i have cahones. big bull ones. the nhs isn't necessarily in terminal decline. just because it is continually mismanaged (and i include labour) doesn't mean it is an unworkable system.
the basic principle is sound, namely that people of the UK have a right to healthcare and that the State will pay for it.