Wimpy, the Public Order Act and a last minute winner 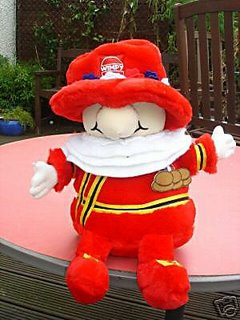 As I slowly woke up on Saturday I could not have envisaged the joys in front of me. The prospect of getting up at 8am on a Saturday morning is abhorrent and the thought of watching Sheffield Wednesday not just once but twice in a week is daunting. For the uninitiated of you, watching Sheffield Wednesday is like watching a speech by the leader (who you don't agree with) of a political party you support; a labour of love.
Eventually we get to Watford Gap for a food break and conceive of my delight on seeing a Wimpy. I didn't even know they still existed and sadly there were no plates and cutlery, that said Wimpy Chicken Chunks (big bastard chunks of chicken as opposed to the anorexic offerings of Ronald McDonald) with fries was awesome. Particularly good was when a bunch of vegetarians, deliberating over the vegetarian options of Spicy Cheese (?) Beanburger or Quorn in a Bap, were informed that products were all cooked in meat oil. Hahaha. If God (or whatever) intended for you to be a vegetarian, animals wouldn't taste so nice.
Somewhat buoyed by the munch, the next touch was a Sheffield Wednesday pub that chucked out pints for £1.50. Four minutes in the match and Wednesday are 1-0 up, the remaining 86 odd minutes are not very enjoyable. Despite having a man advantage Wednesday were pretty piss throughout. 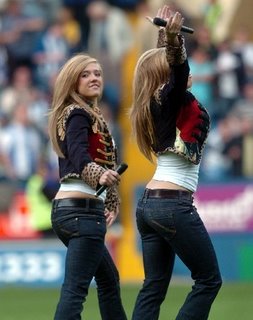 However, after conceding a predictably poor goal, Wednesday grabbed an undeserved, but thoroughly welcome, winner when Chrissy Brunt hammered in an unstoppable right foot volley from the edge of the area. Chris Brunt had been our worst player and continually wasted opportunities and possession. The crowd were giving him some pretty serious jip and then he pops up with a bit of class. And instantly he's a crowd favourite (for about a minute).
Also newsworthy was Twin, the new emerging pop talent who are, you'd never guess, twins. They came on at half-time and mimed their way through a version of Slade's Cum on Feel the Noize. Apparently, they flipped the bird at the 7,000 odd (some very odd) Dirty Dingles (Barnsley fans) and then told them to f*ck off at the end of their performace. I say apparently because from where I was it looked like they were giving the w*nker sign too. They were arrested under the Public Order Act and given fixed penalty notices of £60.
And then the last minute goal. Makes the long journey all worthwhile when you, for once, lack out massively and Leeds lose 4-0 at home.

Comments:
And Argyle won! With ten men! On TV!!! So yes Barry, all in all a weekend to prove that miracles sometimes do happen!

And Watford beat Arsenal to get out of the relegation zone!!!

and Brighton beat Scunthorpe, ending a run of 5 defeats. Scunthorpe, of course, beat league leaders Forest 0-4 last week, so our away win makes us transitively better than everyone else.